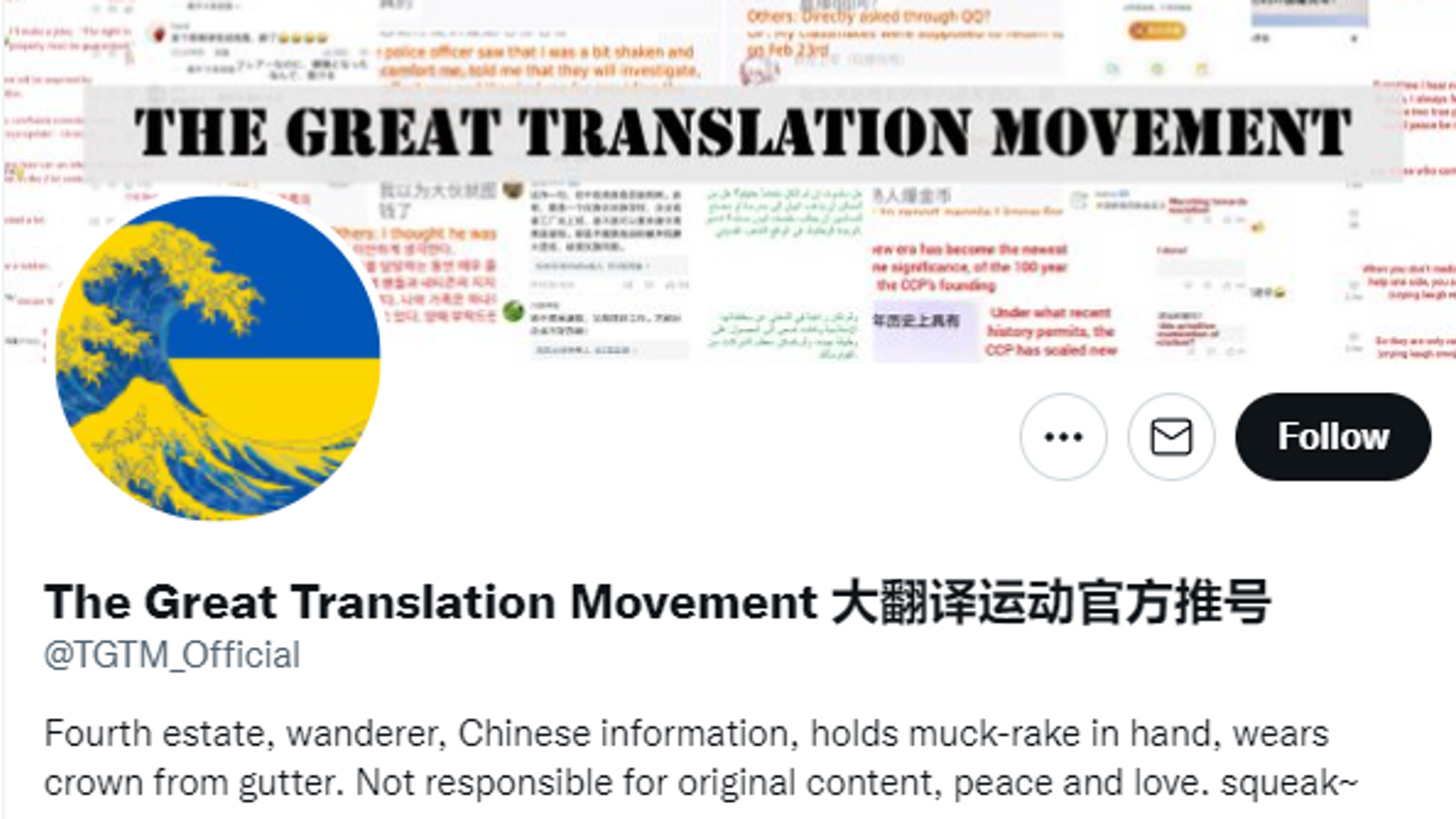 They say they are just volunteers translating posts from the Chinese internet. State media call them “a despicable anti-China smear campaign” and “psychological warfare”.

The Great Translation Movement (TGTM) started on Reddit after Russia’s invasion of Ukraine.

Users posted translations of some of the nationalistic opinions trending on Chinese social media.

For instance, on a story about retired British soldiers volunteering to fight, the top-rated comment was “Demons disguised as angels. Laughable”.

Another wrote: “Ukraine is a sharp knife stabbed at Russia in the hands of the United States.”

The account has moved beyond the war in Ukraine to cover the lockdown in Shanghai, COVID conspiracy theories and online reaction to international news, such as an earthquake in Japan (to which one user reacted: “Wonderful, when will Mt Fuji erupt?”), as well as the casual racism that is often a feature of Chinese social media.

“We are just Chinese people who hate the Chinese echo chamber, and with a passion big enough to translate these comments over a sustained time,” says a person behind the Twitter account, contacted by Sky News via direct messages, who wishes to remain anonymous.

They say a number of volunteers are involved, from different countries, and that Chinese tends to be their native language.

The Global Times, which is controlled by the Chinese Communist Party (CCP), has published a number of articles, describing the volunteers as people of Chinese descent who “hate their native country”, accusing it of fuelling racism against Asians and saying that it cherry picks “nice and radical comments”.

“The image of China and Chinese people in their depiction has been arrogant, populist, cruel and bloodthirsty,” the Global Times wrote.

TGTM does agree with part of that.

“We did cherry pick our comments, but we cherry pick the most upvoted ones, which for the most of the time (well every time actually), happens to be some radical lunatics,” TGTM told Sky News.

“We did occasionally show the sensible comments, all of them got fractions of the upvotes, and were bashed by the nationalists, calling them traitor, for example.”

It added: “The growing number of absurd comments on the Chinese internet we see today is a culmination of what the CCP intended them to be, the long-term effects of mass censorship and propaganda, the exclusion of the outside world exacerbated by the language barrier, the collectivist Confucian culture of unquestioningly obeying one’s rulers no matter how despotic they may be, the memories of the student protesters’ political consequences during the budding democracy of Tiananmen 1989, the destruction of scholarly thought and values during the Cultural Revolution.”

And despite the reaction from Chinese state media, TGTM has no intention of stopping.

The group told Sky News: “No matter what, it’s important to continue reaching out to the rest of the free world to show them the Chinese internet, popular Chinese sentiments, and what the CCP does.”